Wallace Monument
Renew your acquaintance with Scotland's legendary freedom fighter by visiting the National Wallace Monument. Scale the summit of the 220 ft. sandstone tower, which sits atop Abbey Craig, for panoramic sights of the whole of Stirling, reaching from the Forth Valley to the Ochil Hills. Inside Wallace Monument you will learn about the turbulent events leading up to Scotland's momentous victory at the Battle of Stirling Bridge, listen to Wallace's trial in London at the hands of Edward I, and see his battle sword, a huge blade that reached well over 5 ft. in length. The tower was designed by architect John Thomas Rochead and completed in 1869. Built in Victorian Gothic style, the main spiral staircase encompasses 246 steps. 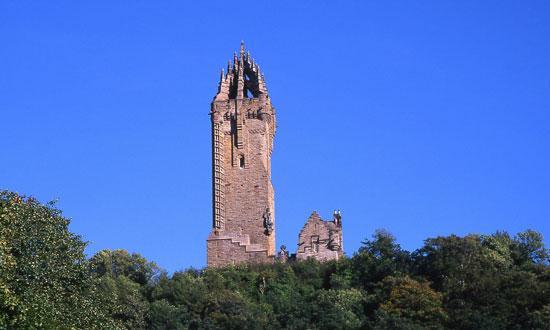 Argyll’s Lodging
A mansion built around an earlier core in about 1630 and was further extended by the Earl of Argyll in the 1670s. Regarded as 'the most important surviving town-house of its period in Scotland' Argyll’s Lodging became a museum at the end of the 20th century. Standing on Castle Wynd on the approach to Stirling Castle, its principal rooms have been restored to replicate their 1680 state. Built and decorated in Renaissance style, the original plan of the house was shaped like a ‘P’, with the upper part centered around three wings around a courtyard. During the early 19th century, the house was purchased by the British Army, which then transformed the grand building into a military hospital. The house retained this military function for well over a century until it was eventually turned into a youth hostel in 1964. Three decades later, the National Trust of Scotland turned Argyll’s Lodging into a museum. Highlights of the mansion include the High Dining Room’s impressive painted decorations and the Drawing room’s grand fireplace and recreated tapestries. An interpretative tour of the lodging is available on the ground level as well as a display about the inhabitants of the lodging. Visitors using wheelchairs will need assistance to negotiate narrow passages and doorways. Tickets can be purchased in conjunction with a Stirling Castle admission ticket. 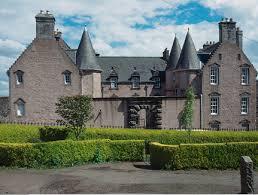 Church of the Holy Rude
Founded in 12th century, the Church of the Holy Rude is the second oldest building in Stirling. The church occupies a magnificent location on the shoulder of the city’s highest hill and thanks to the short proximity to Stirling Castle it played a unique place in history. It was here that James VI was crowned King of Scotland in 1567 with the ceremony being performed by John Knox. 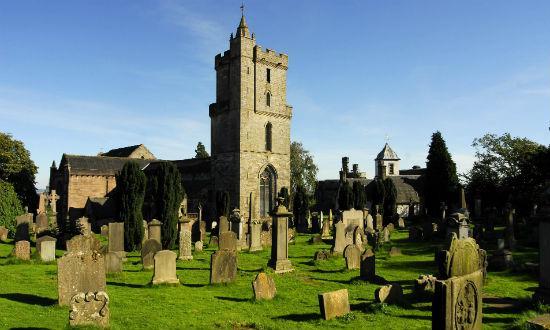 Bannockburn Heritage Centre
The Bannockburn Heritage Centre is situated at one of the most important historic sites in Scotland. Cared for by the National Trust for Scotland. Prepare for battle at our multi-award-winning visitor centre. The Battle of Bannockburn experience puts you at the heart of the action with cutting-edge 3D technology. Outside, wander across the parkland and admire the restored commemorative monuments, including the iconic statue of Robert the Bruce.  Located near the historic city of Stirling and in the vicinity of the battleground, the visitor centre expertly harnesses fully-immersive 3D technology to bring this thrilling chapter of Scotland's story to life. Come and experience medieval combat like never before and discover more about this crucial event in Scottish history.

Take command of your own virtual battlefield to try and re-create the battle, and then witness Bruce's decisive victory, against all odds. Interact with medieval warriors, pages, archers and knights on either side of the conflict as they reveal how they became involved in the battle.  Outside, follow in the footsteps of Robert the Bruce in our memorial park and see the spot where he raised his royal standard. Admire the battleground and restored commemorative monuments, including the iconic statue of Robert the Bruce, cast in shimmering bronze.  Enjoy the family-friendly facilities, including an award-winning café and shop packed full of Battle of Bannockburn merchandise.  During the busy holiday periods entry is by pre-booked time slots.
Both Cottages are situated within the designated Historic Battlefields boundary for the Battle of Bannockburn,  Click 'here' for more information. 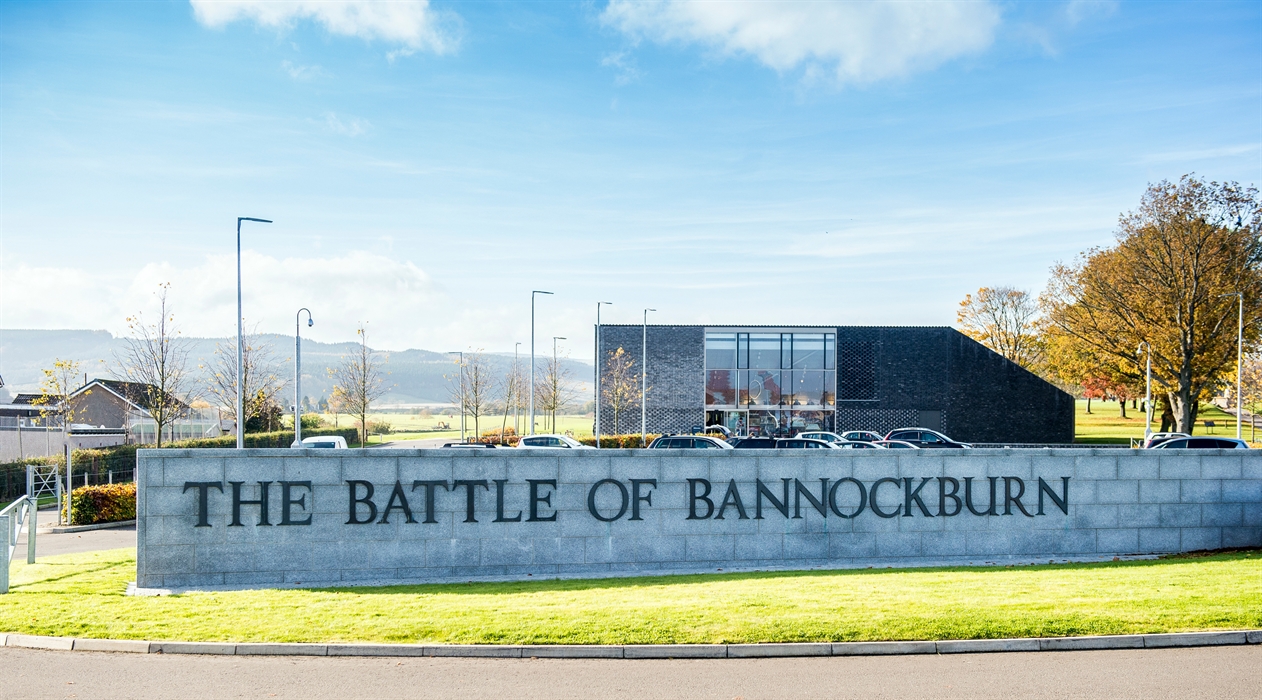 Stirling Art Gallery & Museum
The Smith art gallery and museum is an absolute gem. It is Stirling's local museum and has a permanent exhibition covering the Stirling story. It takes the visitor on a journey starting in prehistoric times and going through the centuries right up to the present day. The museum has the oldest football in the world and much else that is of interest. If you want to know more about William Wallace this is definitely the place to visit. The parking is free and there is a really good cafe selling home made sandwiches, soups and baking. There is also a peaceful garden at the back of the museum if you prefer to picnic.
The Smith is a bit off the beaten track but it's in a lovely part of Stirling beside the King's Knot and well worth the visit. Please note it is closed on Mondays. 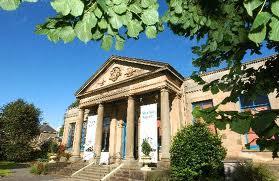 Cambuskenneth Abbey
Originally known as the Abbey of St Mary or the Abbey of Stirling, Cambuskenneth Abbey rapidly gathered considerable wealth and influence because of its royal patronage and its links with Stirling Castle. Within a loop of the winding River Forth, its a fascinating Augustinian settlement founded by King David I in 1147. Benefitting from Royal Patronage of Stirling, this became one of the richest abbeys in the country.
The Abbey was closely involved with the Battle of Bannockburn in 1314: Bruce's Parliament, which met here in 1326, was the first to include representatives of Scotland's burghs. After the Battle of Sauchieburn in 1488, King James III was murdered near Bannockburn and you can see his grave at Cambuskenneth. He is buried along with his wife, Queen Margaret of Denmark. After the Reformation the abbey became a quarry for stone used in various parts of Stirling itself. Apart from the bell tower, which still stands today, very little was left by the time the site was excavated by William Mackison, the Stirling Burgh Architect, in 1864. 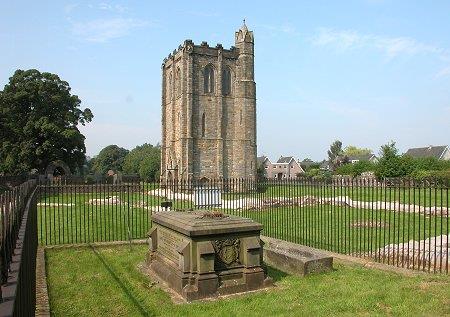 Dunblane Cathedral
Dunblane Cathedral is a beautiful medieval church in Dunblane which dates as far back as the 12th century.
Dunblane Cathedral receives high but well earned praise for a building smaller than some English parish churches, lacking the architectural flourishes and cohesion of most other cathedrals; and one which only narrowly survived the threat of demolition to make way for the railway.
The tower is from the late 11th century, offset, and slightly squint on the south. Admire the Romanesque arched windows in the lower storeys, the upper stage and parapet which date from 1500, bearing the arms of Bishop Chisholm, which may originally have been freestanding.
The Nave, dating back to 1240 is possibly the finest part of the cathedral. It is eight bays long, tall and narrow, with aisles and a galleried clerestory. Its principal attraction is its simple proportions, clustered shafts, and graceful clerestory windows in the west wall. 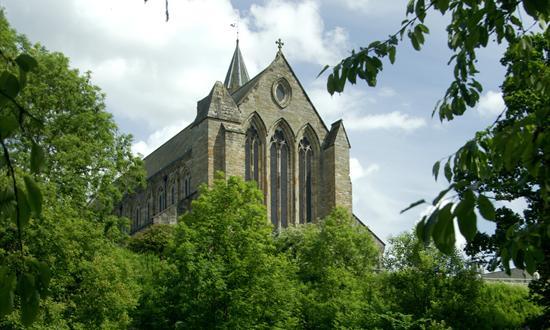 Explore this 14th century courtyard castle in Doune, with a striking 100 ft high gatehouse and one of the best preserved great halls in Scotland. The formidable Doune Castle was built for the Regent Albany. The striking keep-gatehouse combines domestic quarters including the splendid Lord's Hall with its carved oak screen, musicians' gallery and double fireplace. This was used as a film location for the BBC production of Ivanhoe and Monty Python and the Holy Grail.

As well as being heavily featured in Monty Python and the Holy Grail, Doune Castle was also used for the castle known as Winterfell in the pilot of the award winning TV series Game of Thrones as well as Castle Leoch in Outlander.

Find out how grand banquets were prepared in the kitchen servery, and enjoy stunning views of the River Teith and Ben Lomond from the battlements.

The castle courtyard and cellar, including display, is accessible via a steep, cobbled (but partially timbered) tunnel. Assisted access is possible for the determined, but is difficult. Visitors can touch a number of stone features, such as the well in the courtyard.

Tuesdays and Thursdays throughout July the castle is open until 8pm. (last entry 7.30pm)

Doune Castle on the silver screen

The stunning Doune Castle plays a leading role in the show substituting for the fictional Castle Leoch – home to Colum MacKenzie and his clan in the 18th century episodes. It also features in the 20th century episode where Claire and Frank visit the castle in ruins on a day trip.

Outlander is the TV adaptation of the critically acclaimed time travel romance and fantasy adventure novels by American writer Diana Gabaldon. It centres around the story of Claire Randall (played by Caitriona Balfe), a married English combat nurse from 1945 who, while on her second honeymoon in Inverness, is mysteriously swept back in time to the 18th-century Scottish Highlands. There she meets Jamie (played by Sam Heughan), a chivalrous young warrior, with whom she becomes romantically entwined.

To find out more about the series and its Scottish connections, go to www.visitscotland.com/outlander 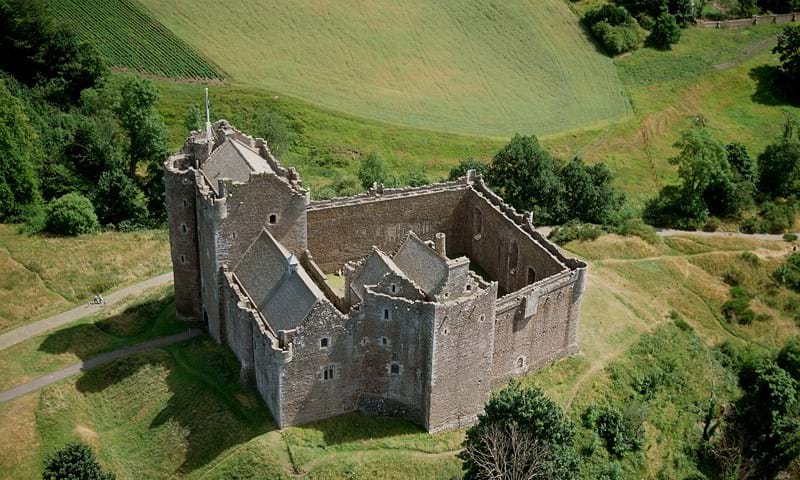